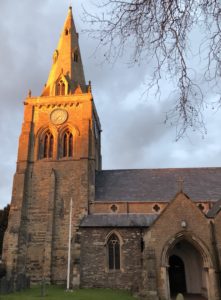 St. Mary and All Saints Church, Bingham, was founded in the early 13th Century and most of the structure is of the 13th and early 14th Centuries. Obviously, there is a wealth of history associated with the Church; for example, the font-bowl, which appears to be Norman, is probably the oldest item and may come from a previous church. The oldest of the bells was installed to celebrate the defeat of the Spanish Armada. Some of the incumbent Rectors were quite colourful; one, Matthew Wren, was the uncle of the celebrated architect Sir Christopher Wren, and a few years later came Samuel Brunsell who was a Royalist secret agent.

There is also the old Victorian school, now Church House, built in the Gothic style by Canon Robert Miles entirely at his own expense.

By joining the Friends you can contribute to the continuing life of these historic buildings. We are a registered charity, originally formed in the 1950s, with the sole object of maintaining, preserving, improving and enhancing the fabric, fittings, ornaments and monuments of the ancient Parish Church and Church House, to ensure that they remain as living places within Bingham.

In recent years the Friends have restored the Lychgate, provided lighting for the footpath, produced the Church Guide and contributed to the painting of the church clock faces and the restoration of a painting hanging in the chancel. There is always more to do.

Membership of the friends is open to all in sympathy with their objectives. If you would like to join, please complete the enrolment form available in Church.